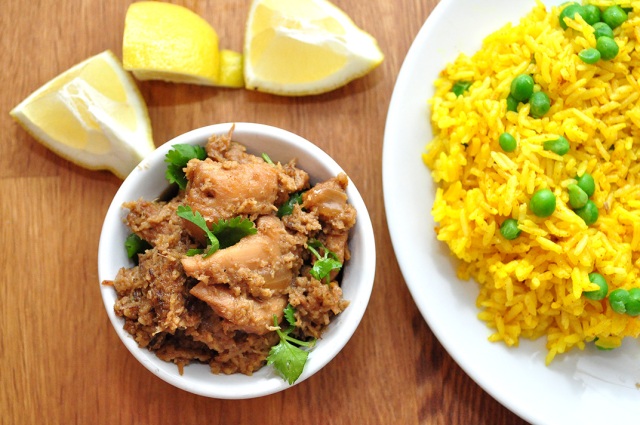 This lovely number is from one of my first cookbooks, garnered from that sale table at Borders so many years ago: the ‘Best-Ever Curry Cookbook’ by Mridula Baljekar.

The region of Goa is known for its coconut, and since I don’t think most people associate coconut flavors with Indian cooking (I certainly didn’t), I think this will come as a delightful surprise. 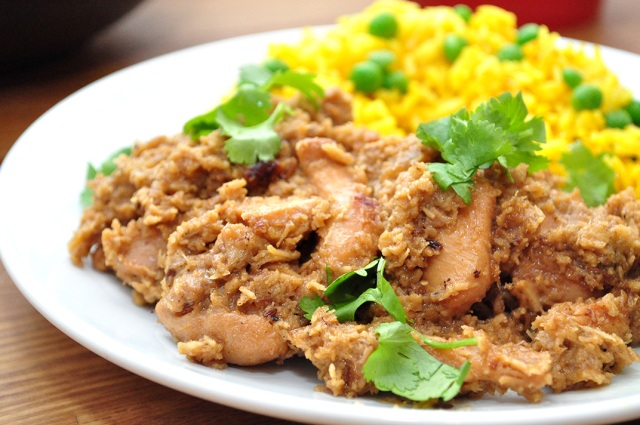 Unless you’re a rebellious coconut hater.

And unless you’re against dishes that look like a pile of schmushy brown sludge.

But tasty does not always equal photogenic–right? 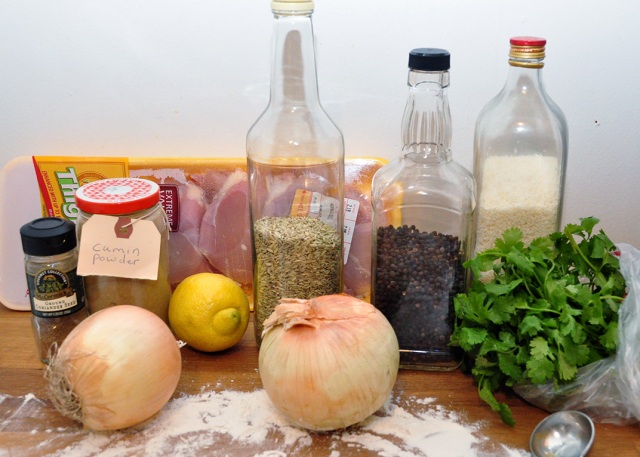 Soak the coconut in the 3 tablespoons of water for 15 minutes. 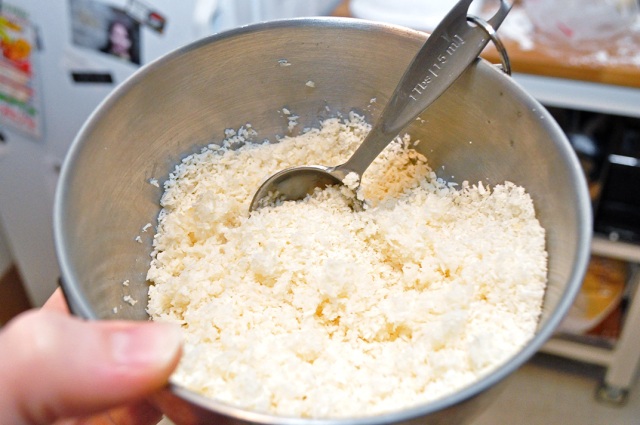 Chop up the onion nice and fine: 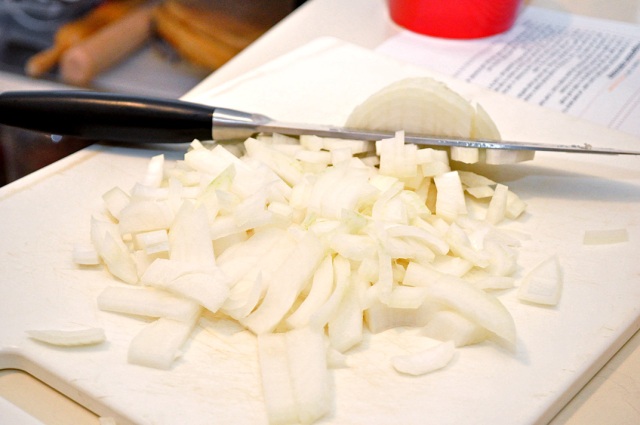 Heat 1 TBS oil in a large pot or wok and fry the cumin seeds, peppercorns, fennel, and coriander seeds over low heat for 3-4 minutes (until they start spluttering). 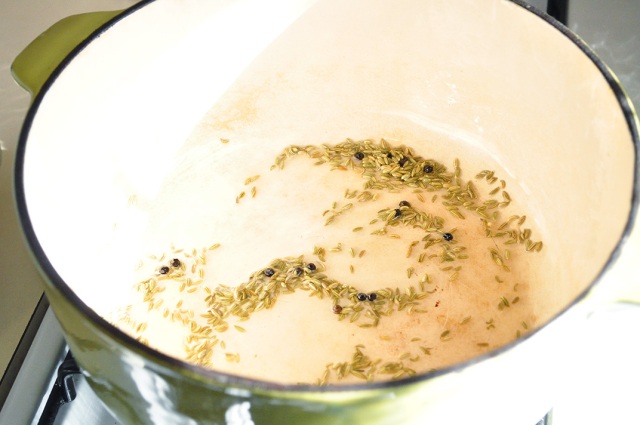 The smells during these few minutes are to die for. “Hmmm, what smells like pizza?” my husband inquired happily, wandering into the kitchen. It’s those fennel seeds. They do it every time. One sausage pizza, not coming up.

Since I didn’t have coriander or cumin seeds (just the powdered kind) I added them along with the onion so as not to burn them. 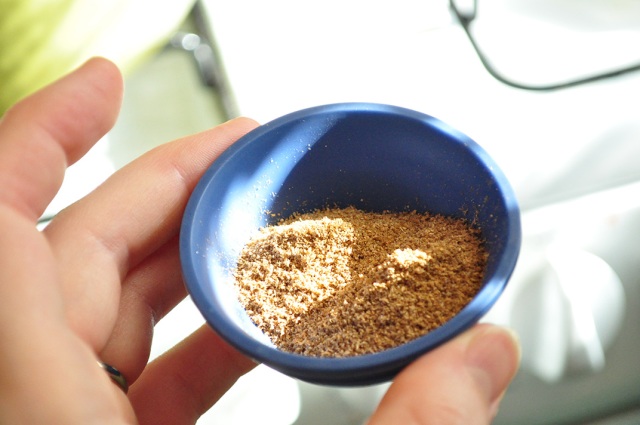 Add the onions to the spices. 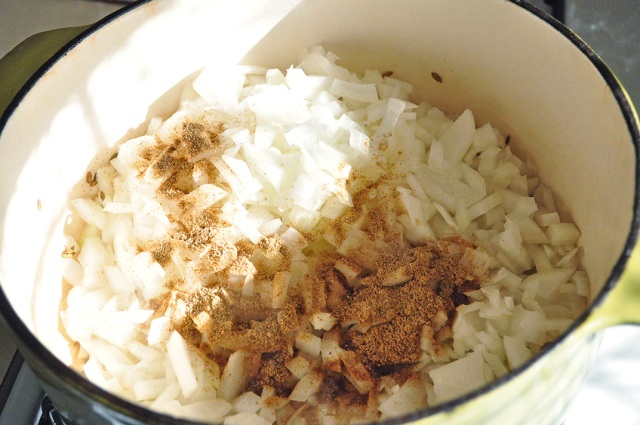 You’ll notice that at this point, the sun was slanting through our solitary, grated kitchen window. We only get about 10 minutes of natural light in there per day, and the light just so happened to invade right when I was trying to photograph the curry. That’s why these shots are a little whacko. Whacko exposure, whacko shadows, whacko whacko whacko.

But back to the curry! Which is not at all whacko.

Fry the onions for about 5 minutes, stirring occasionally, until they’re softened and become opaque.

Add the moistened coconut and salt, and keep frying for about 5 minutes, stirring. 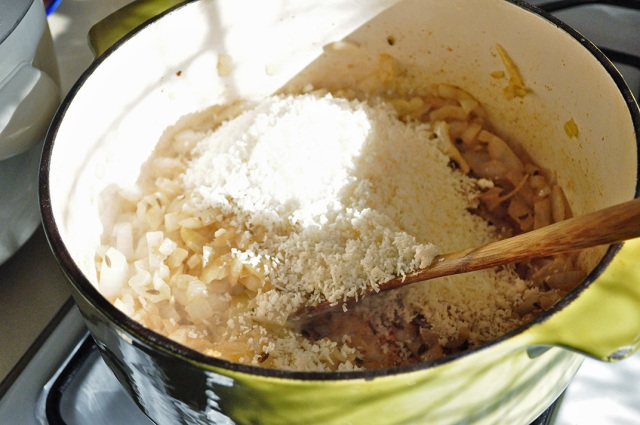 I love coconut in all forms, but especially in a good curry. 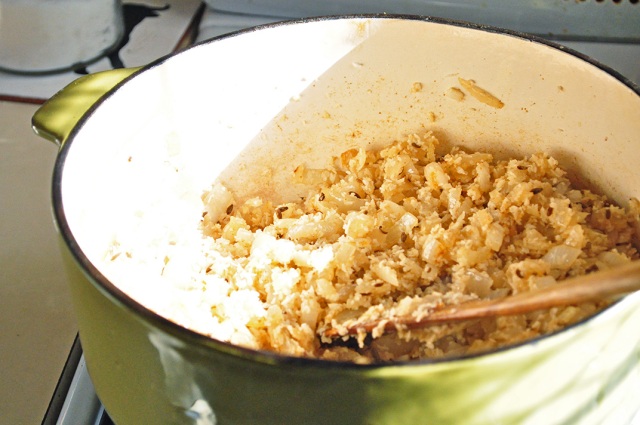 And now! Put the entire onion/coconut mixture in a food processor and process until it forms a rough paste. 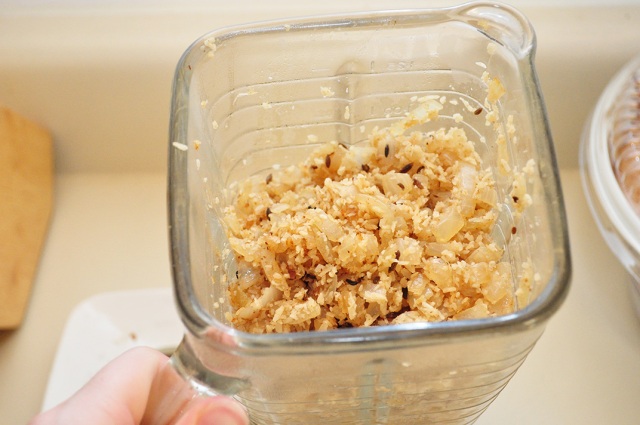 Why oh why didn’t I just get out my food processor from Aunt Jacquie? It was a battle extraordinaire to get the onions and coconut to finally resemble this: 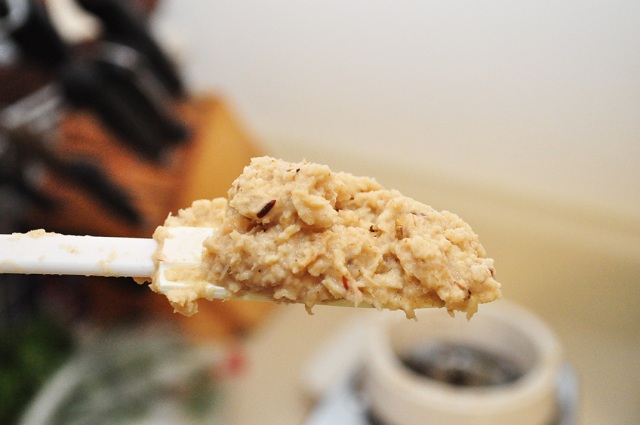 I had to take a small break to cool down at this point, because I had worked up a mighty, mighty sweat.

All because I’m afraid of that ginormous food processor from the past. My cousin’s wife even cleansed it of all the dead insects and spiders–so why the fear? Why indeed. Is it so wrong to want a smaller, more modern food processor when I have this large and free one? I will be debating this internally, writhing in guilt, for at least the next few months, at which point I will give an updated status report.

Anyway, set the paste aside.

Cut the chicken thighs into bite-sized pieces (on the larger side). 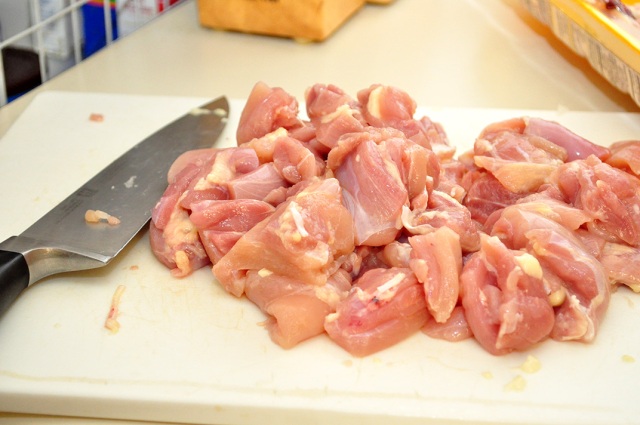 You can also use big ole chicken pieces (such as drumsticks) after removing the skin, and leave them whole–that’s what the original recipe demands. But this time, I just wanted something I could scoop up with a spoon and ferry straight into my mouth. Either way, it’s great.

Heat the rest of the oil in the pot, and fry the chicken for 6-7 minutes. 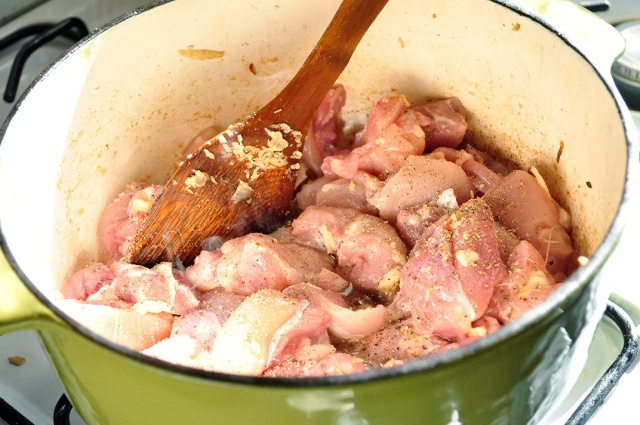 Add the coconut paste (and note how the sunlight is quickly disappearing off to the side) . . . 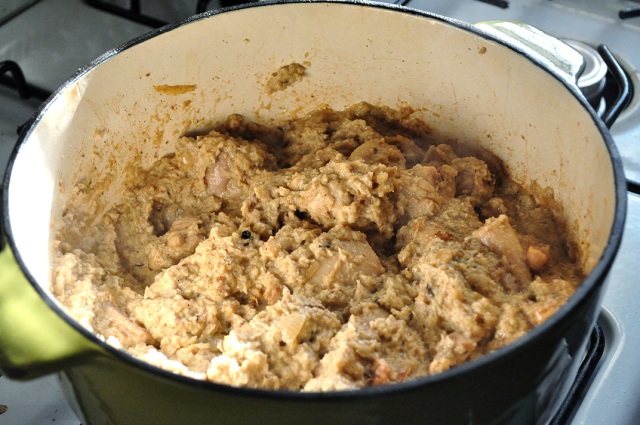 . . . and cook over low heat for 30-40 minutes, until the coconut paste is a golden brown and the chicken is tender and cooked through, stirring occasionally to avoid burning at the bottom of the pot.

After about 15 minutes it still looked pretty pale . . . 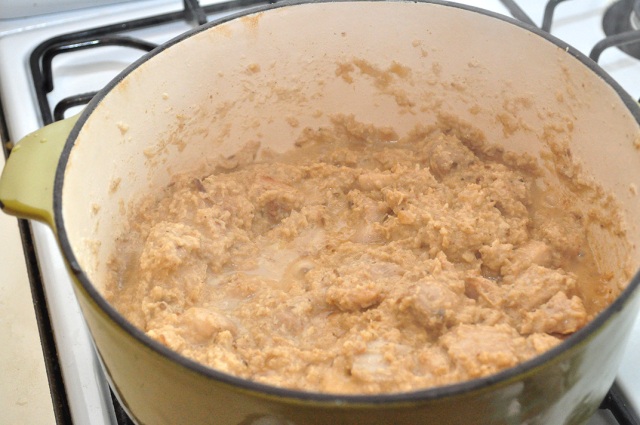 . . . but as I stirred up the brown bits and gave it some time, after about 40 minutes it looked like this: 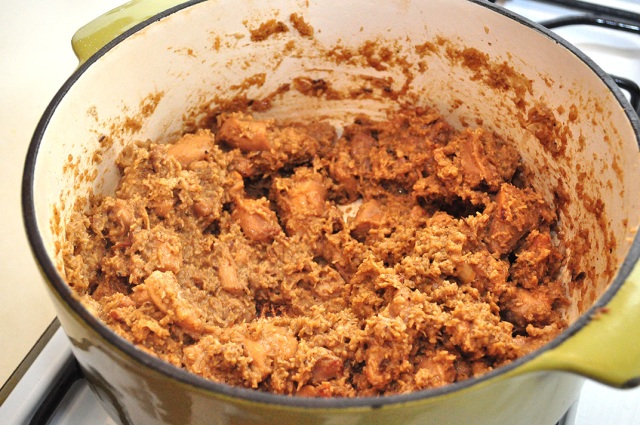 Mucho better-o. Time to taste, re-season, and stir in some cilantro. 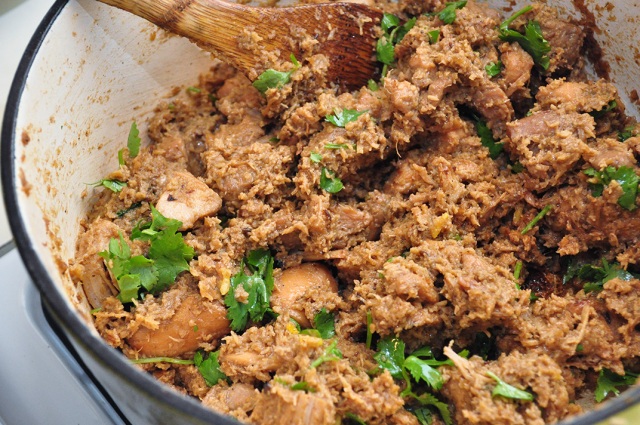 The sauce is so flavorful, it blew my mind. Even though I had made it once before.

Also time to cook up some naan. 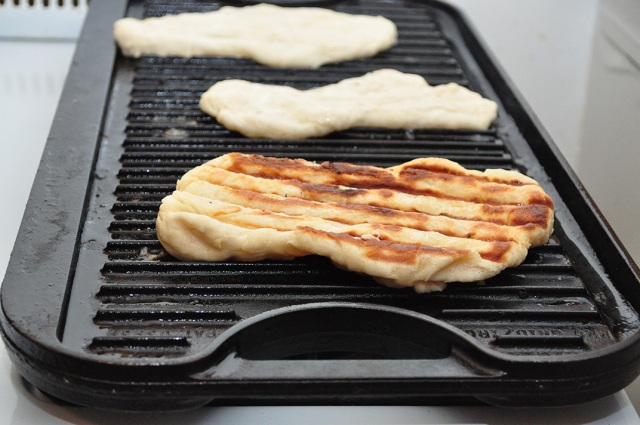 At this point my husband grabbed the camera from my hands. 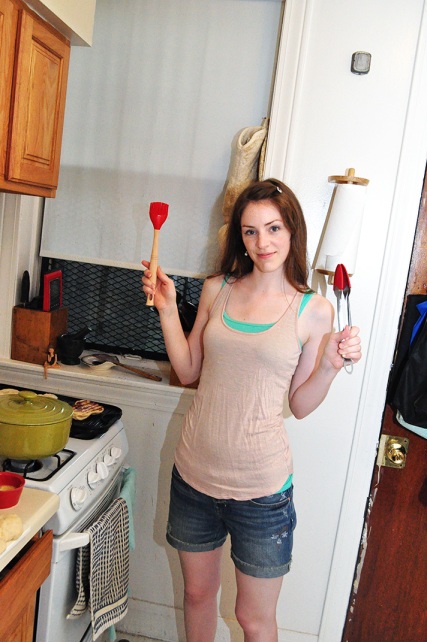 Then again, let’s not dwell on that question for too long. They function and allow me to bend and walk and move around and such, so I’m grateful just to have ’em in there, cooperating with the cartilage and knee cap and tendons, doing their job day after day. Thank you, Oh Knobbly Ones.

Taste the curry and re-season if necessary . . . and serve it over rice! 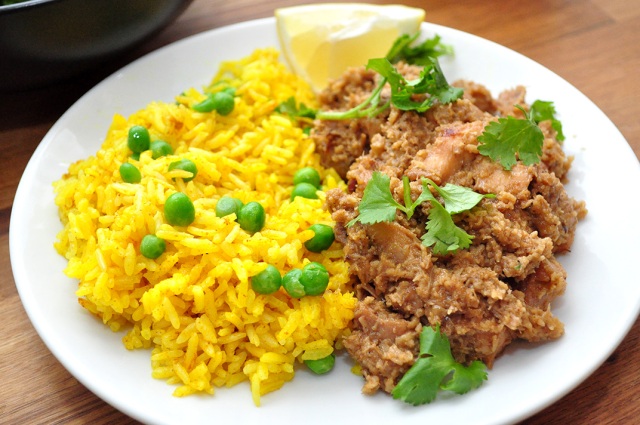 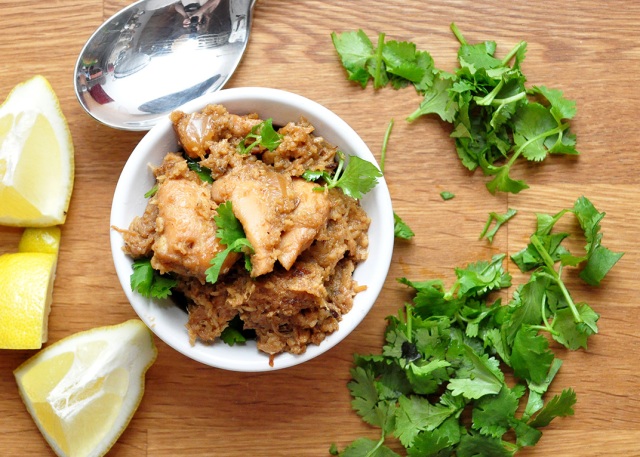 Very tasty guys, very tasty. And different than anything else I’ve eaten. 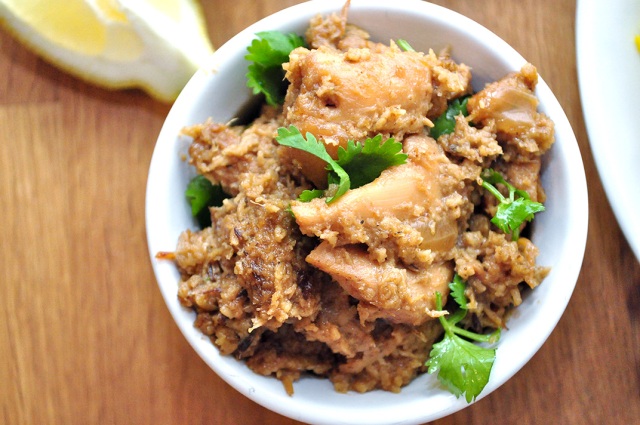 I served it over that Golden Basmati Rice. Though it does it look kind of like . . . 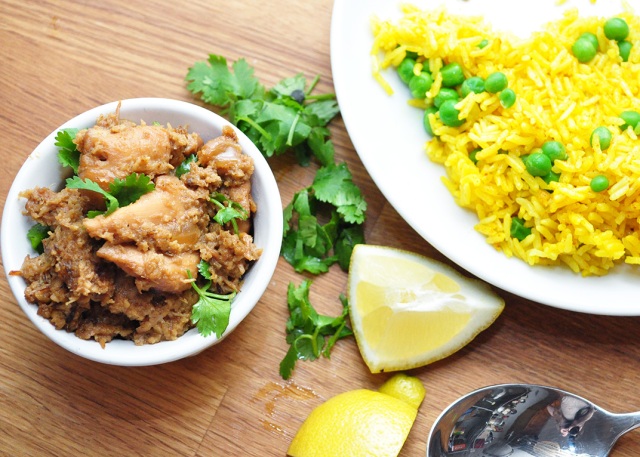 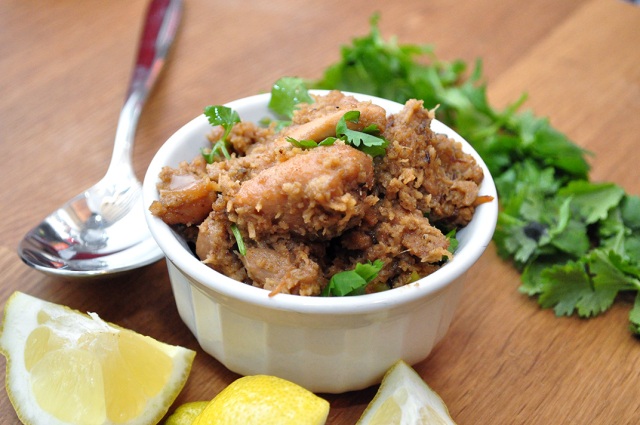 I changed my mind. Erase that from your memory. 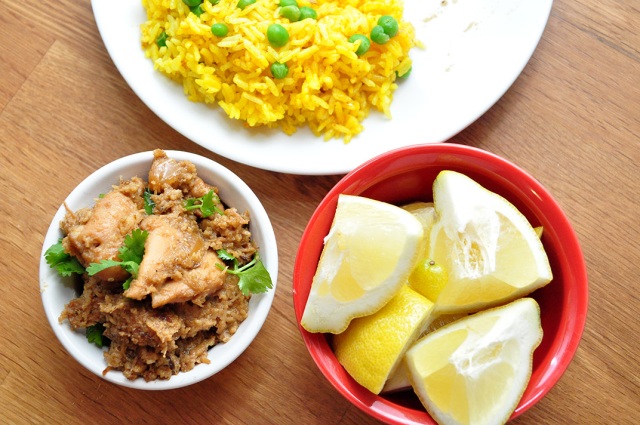