I am so excited about this sandwich. Not just because it’s delicious, easy to make either for breakfast or on a busy weeknight, and made from things we normally have in our pantry (though all those things are true), but because there is finally an entry under my ‘sandwiches’ category. This brings me one step closer to accomplishing my summer culinary goals. Can I hear a “hoo! ha! fuhubugadz!” from anyone out there in the crowd this morning?

The sandwich is nothing fancy, though you could dress it up with chives or peppers or bacon, but I’m sharing here just in case some poor urchin out there hasn’t tried throwing one together before. And I mean ‘urchin’ in the most affectionate way possible–I’m going for a lovable and pathetic Oliver Twist kind of thing. See, I was once of those poor urchins who hadn’t made a breakfast sandwich before, until one of my sisters stepped in and changed things forever.

I can’t remember which one. Maybe Erica? Maybe Heidi? Anyway, it’s satisfying and perfect and . . . well, technically not really a recipe.

“You know, even though I’m posting this on my blog, let’s be honest–this isn’t really a recipe,” I said mournfully to my husband after tossing it on a plate. “It’s more like . . . an assembly.”

“But assembly meals are my favorite kind!” exclaimed my husband.

So with his support and encouragement, and because this satisfied his man-palate and his man-stomach, here we go! 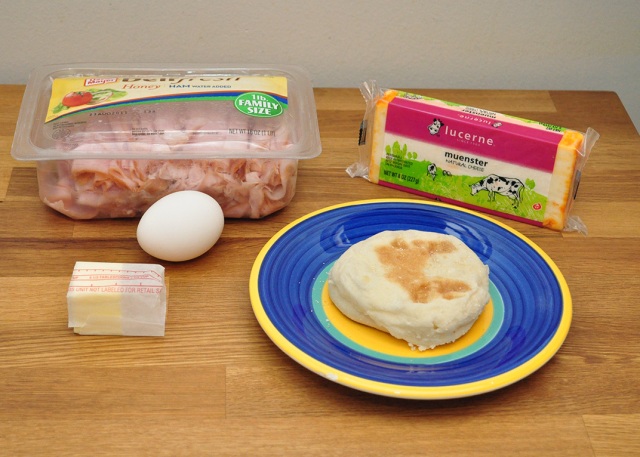 Don’t harangue me for saying ‘good quality ham’–I’m not trying to pull an Ina Garten on you (though I do love the woman)–it’s just that since the ingredients here are so few, the quality will really make a difference. With that note, we shall proceed.

Halve and toast the English muffin . . .

In a non-stick skillet, heat up the pat of butter over medium high heat until fully melted. Crack the egg into the butter, sprinkle it with salt and pepper, and turn down the heat to medium. 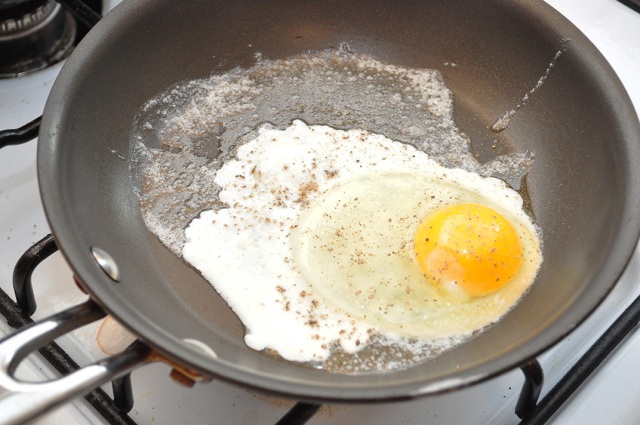 As the white of the egg begins to set, use a spatula to gently break the yolk in the middle and fold the thin edges of white towards the center to create a round shape. Something like this: 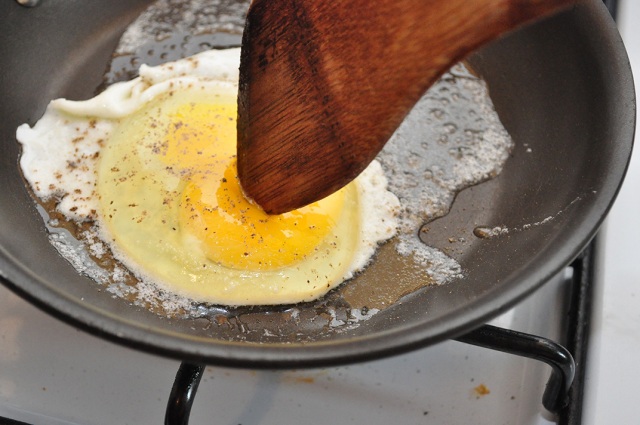 And I almost forgot–toss the slice (or slices) of ham to the skillet, next to the egg.

Take a second to slice up the old block of Muenster. And that “old” was an affectionate term, not an indicator of a potentially moldy situation. 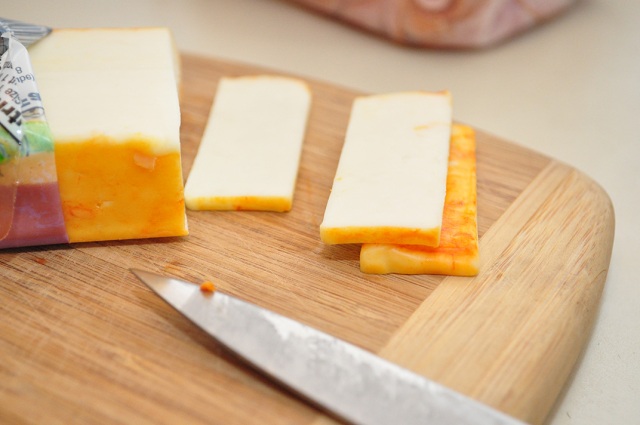 Make the slices on the thin side–we don’t want to drown this thing in cheese.

Cook the egg for just another minute or two, until it’s fully cooked and the cheese is melted.

You’ll notice that my one slice of cheese somehow became three slices of cheese. I chalk it up to the Mysterious Ways of the Universe.

Now it’s time to assemble the sandwich: put the egg, cheese and ham between the English muffin halves.

Check out the tasty brown bits on the ham. Oh yes. 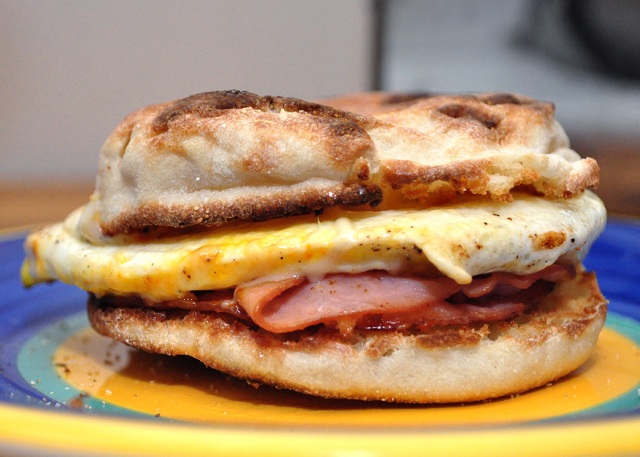 Seek the opinion of the man at the table.

Make this sandwich! You will approve too.

And now for something completely different: I was recently reading through my daily blog list, happily perusing Amy’s post on a lovely pasta dish with zucchini and mushrooms. She went on to say that she’d just received a gift from a so-called ‘Fairy Hobmother’ from Appliances Online, and encouraged us to leave a comment on her post since this Fairy might grant us an appliance wish too.

“Who is this Fairy Hobmother person, and why the heck would she send me an appliance?” I asked myself. I followed the link to an online appliance store. “Oh well,” I shrugged, “If they employ a fairy who wants to send me free stuff, I guess I want a juicer.” And I moved on with my life.

When I opened my email on Wednesday, surprise surprise: the Fairy Hobmother has not only decided to send me a juicer, but also says that if any of you all want to leave a comment on this post and make a wish, she may also decide to drop by your digs (figuratively speaking) and send you the appliance you’ve been needin’. Wow. I guess this somehow works out for the appliance company financially . . . but I’m not exactly sure how. Thankfully I don’t have to worry about that. Phew.

Now I can start my day off with Swamp Monster food: blended kale, avocados, carrots, and who knows what else. Maybe a splash of heavy cream, ’cause that’s how I roll.