So I’m assembling and editing pictures from Saturday’s Regency Ball in order to put together a post for you guys. A few things you should know: I did not turn into a pumpkin. Our dresses were beautiful. Our husbands get an A + for coming with us and learning all those period dances. That evening we arrived back in Chicago pretty exhausted; those Regency dances may look calm and elegant, but lemme tell you–I worked up quite a sweat. So until the time that I can spit out the full report of our doings, I bring you: more food.

During that roadtrip to Kentucky two weekends ago to visit my sister Erica, she whipped up a lovely dinner for us in an attempt to recreate a soup she had experienced at a restaurant. Whereas I tend to get my inspiration from specific recipes, she is the queen of throwing things together and creating something marvelous from scratch. What magic lies in the recesses of her little brain? And how can I get some of that magic?

I don’t have answers yet, but I plan on absorbing whatever I can through faithful readings of her recently inaugurated blog. Maybe she will reveal her secrets, who knows.

So anyway: being the blonde tornado of wonder that she is in the kitchen, I just knew I had to record and photograph whatever she was concocting for posterity.

You can thank me after you make this simple, comforting soup. And if you’re thinking “Soup?? But it’s springtime! Salad time! Pasta Primavera time!” thing again. Here in Chicago we’re back down in the 30s, and soup season ain’t over yet.

3 leeks, chopped (use the whole leek)

Half and half or heavy cream, to serve (optional)

Fry up the bacon in a large soup pot or Dutch oven.

Erica has a handy little bacon press that helps things cook quite uniformly.

Once it’s browned and crispy, remove the bacon and chop it up. 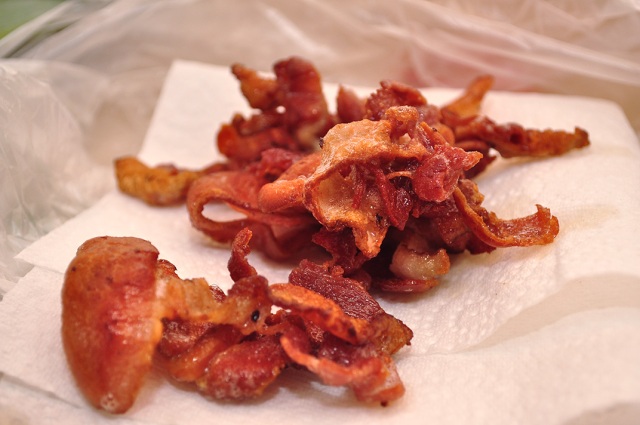 Important note: please fend off any cats that may gather during this time for bacon hand-outs. 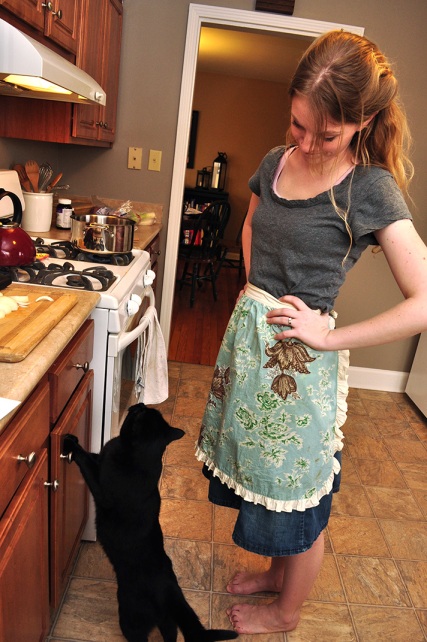 While the bacon is frying, you can give a rough chop to the onion: 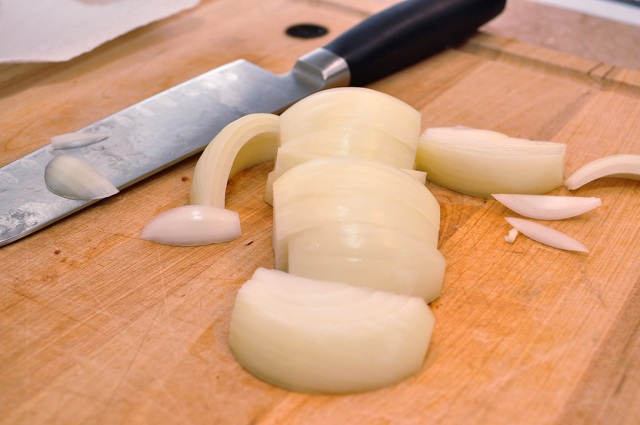 Peel and roughly chop the potatoes: 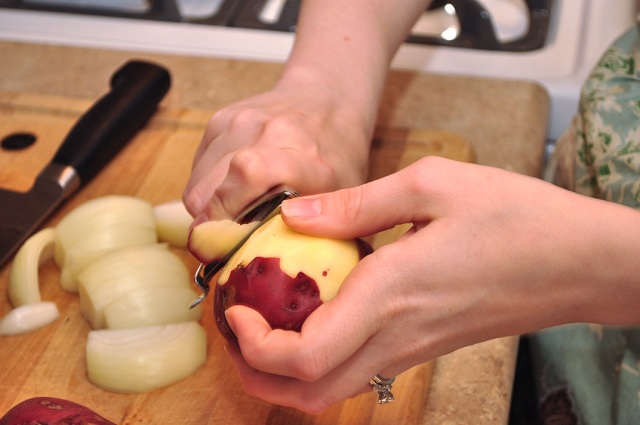 And chop up those leeks too. Make sure to give them a good all-’round washing, because dirt gets stuck in between the layers, and you don’t want any suspicious crunching happening during the consumption of this soup.

Don’t be afraid of using the dark green parts–they are quite delicious. And I’m sure they’re also good for you in some way. 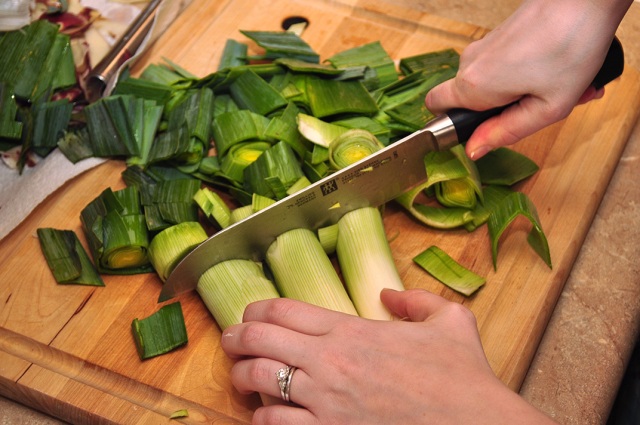 Remove all but 1 TBS bacon grease from the pot. Over medium high heat, fry the chopped onion for about 5 minutes, until it’s starting to get brown.

Grab the soy sauce and coriander:

Add it to the onions, and simmer for a few minutes.

The bacon adds great flavor to the soup, but it will become limp after simmering for half an hour, so if you want some crunchy bacon on top, set a couple pieces aside and use them for garnishing the soup once you serve it.

Now: pour in enough water to almost cover everything. It’s okay if a couple leeks are peeking out. 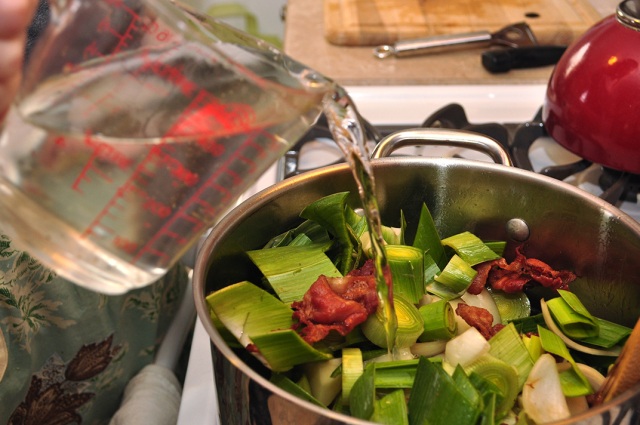 This could be anywhere from 6-8 cups of liquid depending on the size of your pot. Give it a stir:

Add in the cubes of beef bouillon and the 1/2 tsp of black pepper, then cover the soup, turn the heat down to low, and let it simmer for about 30 minutes or until the potatoes are tender but not mushy or falling apart.

After those 30 minutes, taste! We needed loads more black pepper on our end.

Use a generous hand with that black pepper–we’re looking for a little punch.

Okay, not the most beautiful soup in creation, I’ll give you that. But back to the flavor: add a pinch of nutmeg to the soup, and taste again for seasoning. If you need more depth, add some more beef bouillon and soy sauce.

. . . or with a little half and half or heavy cream stirred in.

I’ll let you guess which way I chose to eat mine.

Cream all the way, baby.