After the insanity of the cooking class on Friday, I awoke on Saturday just shy of 11am out of a dead sleep. As much as I love the occasional trip, gallivanting around Chicago and going to concerts or art shows or the movies, my ideal Saturday is spent chilling out. Recovering from the week.

It’s how Saturdays were always meant to be.

I started out with an amarula-spiked cup of coffee, and a devotional by the window.

In order not to feel like a total slob, I like to be the teensiest bit productive. That justifies the movie-watching, cookies, and pile of afghans that tend to occur later in the evening.

So in the afternoon I took a trip to the grocery store. Then I ambled home and worked on my scrapbook for a couple hours in the 2nd bedrooom while my husband graded papers for the Philosphy of Religion class he’s T.A.-ing for. It was quiet and peaceful.

I made it all the way to the end of last August–you can tell because those shots are from Family Vacay 2010. Ah, the colorful kayaks . . . ah, the quiet and sunny dock . . .

And there’s the picture I’ve been using for a header on this blog!

I came across some papers from the game of Chinese Telegraph we played during our summer vacation. They were so much fun to look at!

If you haven’t played this game, it’s a must for large groups, as long as you don’t mind getting a stitch in your side from all the laughing.

I love these two pictures of my husband’s guitar–I’m thinking of blowing them up and hanging them on a wall somewhere. There’s just something about the deep turquoise color that calls to me. 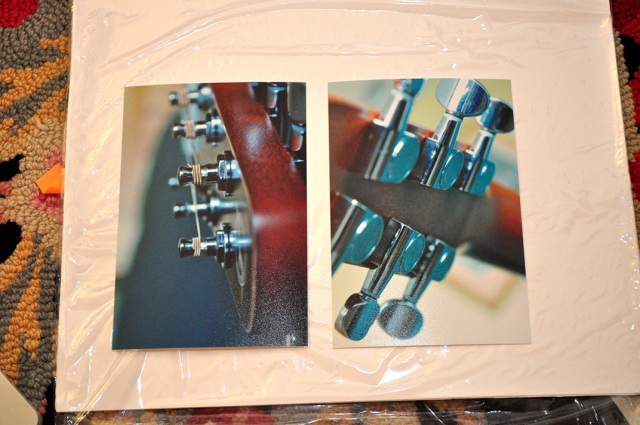 Then we did laundry . . . massive amounts of laundry. At the laundromat, where as the fates would have it, we were serenaded to the tune of “The Itsy Bitsy Spider” by the plastic lion. We brought books to entertain ourselves but ended up just talking about this and that, in that comfortable way that denotes we’ve known each other for almost 10 years. 10 years–when the heck did that happen!?

We walked back as the sun was starting to go down and the air getting chilly. Back home, we festooned our living room with the drying clothes.

Then the desire to bake hit me–it’s a new impulse that I have yet to learn how to control. The result: these Peanut Butter and Jelly Bars (recipe coming next week). We mixed them up while listening to Prairie Home Companion–Garrison Keillor’s voice puts me into a lull of well-being. 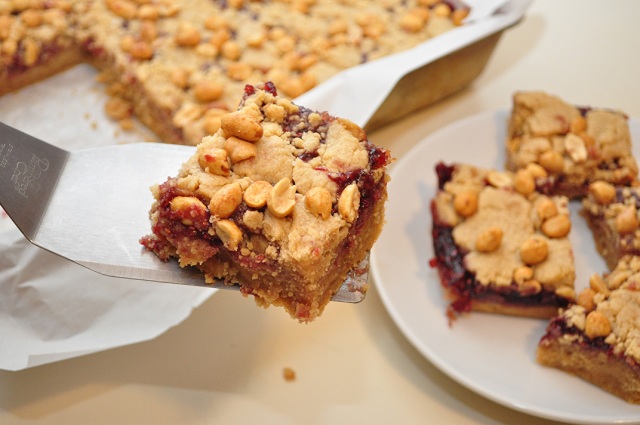 Then there was some dinner–leftover brussel sprouts over rice. Yum.

When they first come out of the fridge, they stink to high heaven (just like cold cabbage), but as we reheated them with extra bacon, they became delicious-smelling once again.

Finally, we put on some music and relaxed into some fun reads. 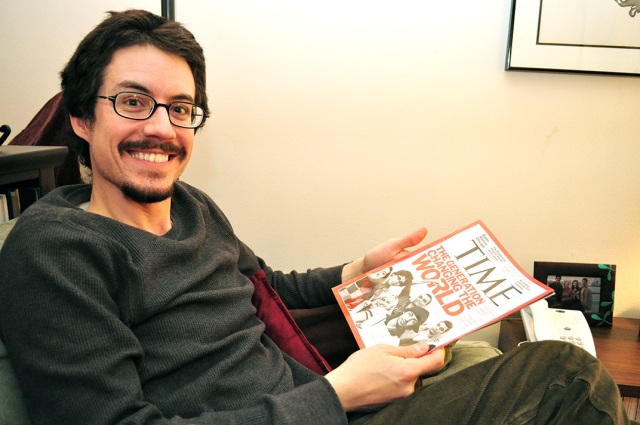 (If he looks slightly frightened/surprised it’s because he was. See, I shouted really loud a millisecond before snapping this; I thought it would result in a more natural look. Sorry I scared you, honey bunches. Though it’s probably good exercise for your heart or something.) 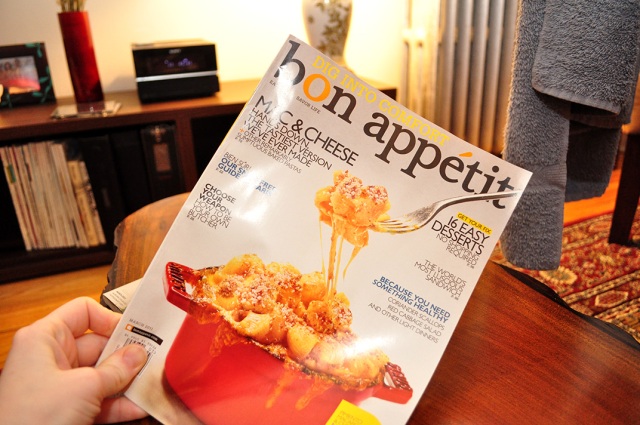 Shock of shocks–there’s a recipe for Peanut Butter and Jelly bars!

Hey! What?? I had just made them, like 2 hours ago. I think I might have a psychic connection with their editorial staff–there’s no other way to explain it. 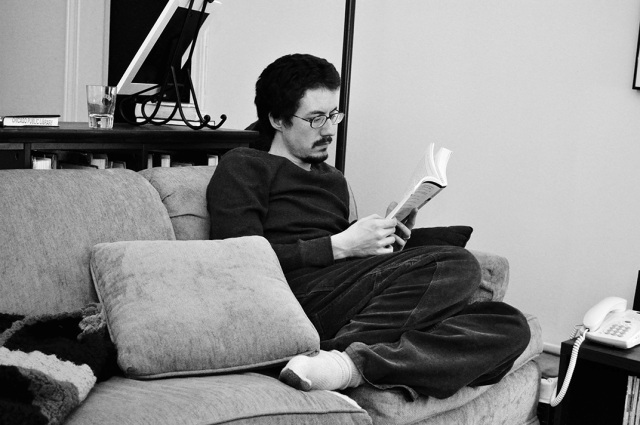 That’s where my head was moment earlier, and was about to be again. Is there anything as comforting as the lap of a loved one? Especially when you get head and shoulder scritchies tossed in there too?

I want a thousand more Saturdays just like this one.

P.P.S. Tomorrow, back to a subject of greater general interest: food! The second cooking class recipe will be up, which boasts the very long title of Roasted Red Pepper Soup with Lime Cilantro Sour Cream and Roasted Corn. But I like to simply call it “More, please.”

This entry was posted in Musings and tagged city life, Cooking, marriage. Bookmark the permalink.

15 Responses to Meant to Be