The ins and outs of pig wrestling . . . in Egyptian costume

My Mom’s side of the family represents a whole blogging can of worms I have barely even touched yet. I briefly talked about Big Jake and his generous shipments of food over the years, but there is so much more. Stories of a parachuting Santa Claus in Puerto Vallarta, mannequins taking over the living room, my grandmother Mama Kitty wearing lingerie in the snow, playing dress up with Mama Kitty’s hundreds of evening gowns and hats . . . you probably wouldn’t even believe most of it.

And that’s where the photographic evidence comes into play.

Today the topic is pig wrestling. In costume. Was anyone able to guess the event from the picture at the end of my Halloween post? If so, let yourself be known so that I can laud you with glories untold.

Let’s start at the beginning:

My uncle Jeff and aunt Paula live in Wisconsin. They started a yearly festival called “Wild West Days,” which began small but has been growing from year to year into the gigantic affair it is today–there’s actually a Wild West Days committee these days. It takes place in a faux Old-West town with real buildings. There is a rodeo. Local craftspeople and vendors set up shop in various tents . . . tents which my cousins and I have been responsible for setting up and tearing down if we are available. I have personally made sure not to be available for many, many years.

Everyone goes about in costume. Groups of actors do spontaneous reenactments across the town. I was somehow caught up in the midst of one, but please don’t ask any questions. It involved weeping over a man who was playing dead, and it happened during my over-dramatic teenage years. 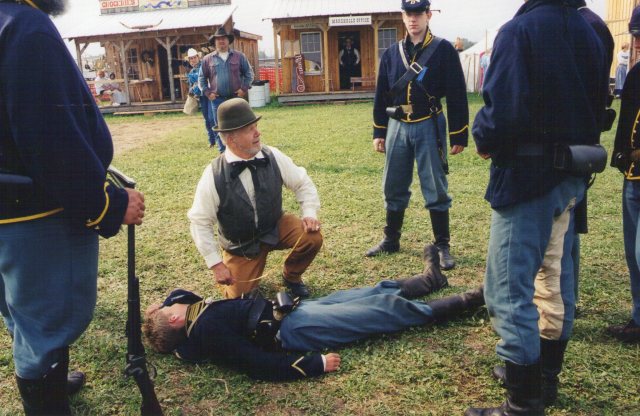 I have the sneaking suspicion someone may have caught this moment on film, and I can only trust that they have made the wise choice to destroy that footage.

There are kid’s games, like treasure hunts in a sandbox, toss-the-ring, throwing a ball at a china plate, etc. You can pay $20 to get your favorite enemy ‘arrested’ and briefly put into jail. Good money was put down for the incarceration of my high school science teacher. Please don’t ask how or why he came from Spain to America for a summer and ended up with my crazy and wonderful relatives–but he took it all in good stride. He also pig wrestled–photo forthcoming.

The pig wrestling takes place in a giant mud-filled circular thingamaging. The mud is nice and deep. A pig is set loose. Teams of 3 people come into the ring in turns, and try to capture the pig, lift it, and place it in the barrel at the center of the ring. The team with the best time wins.  A new pig is released for each team so that no one pig gets overly tired. Oh, and when cornered, the pigs get scared and pee in the mud, right in front of you–into the very same mud you will shortly be wallowing in as you launch your body at the animal and fail to connect with any part of its pink and slippery hide.

How anyone thought 3 skinny girls could wrestle a hog down, much less lift the dang thing high enough to get it into a barrel, is beyond me.

Each team has a theme, and costumes to go with it. It was the summer of 2000. Our theme was Egyptian gods–we were Porkus, Hogsiris, and Cleopigtra. 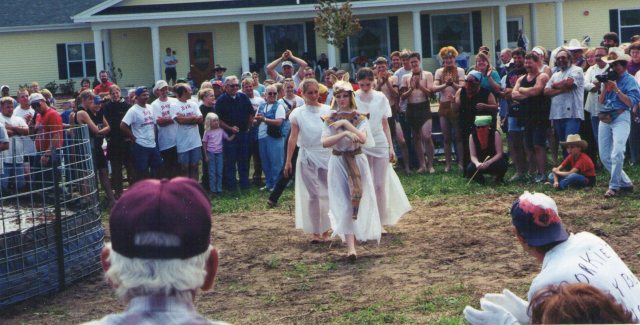 Erica is in the middle in the golden headdress. I am on the right. Some poor girl that was conned into being our 3rd team member is on the left. We started by parading around the ring in character. 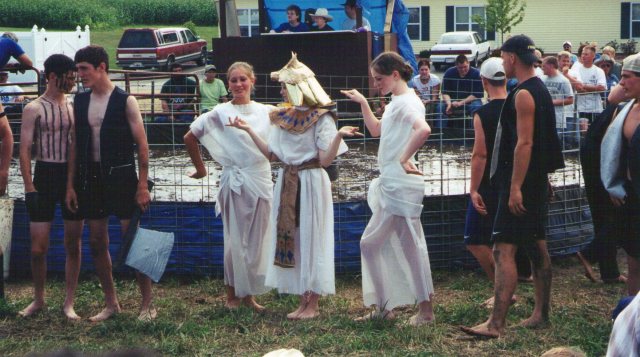 We wore long gauzy fabric over white WalMart body suits. This was our first mistake. Have you ever tried to run in gauzy fabric that is weighted down in mud? We were about to discover that it is, in fact, physically impossible.

We entered the ring. It was very squishy underfoot. 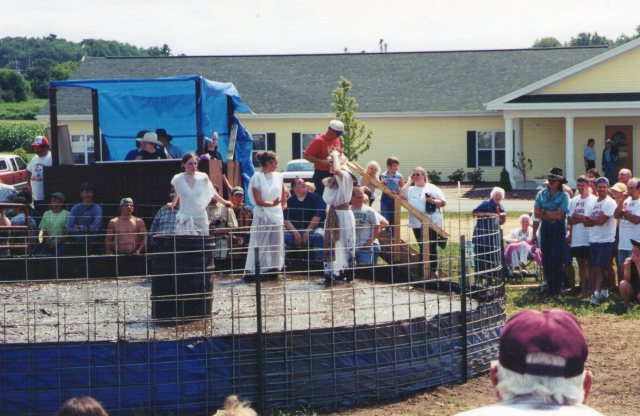 Someone shouted ‘go’ or maybe shot off a gun. And we started our heinously muddy mission. 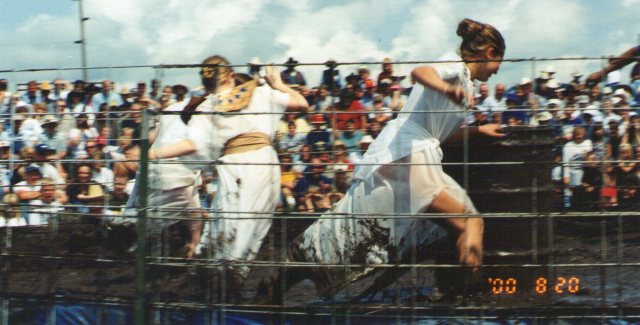 At one point, I body-launched myself toward that pig.

I don’t remember what the time limit was, but soon it was over. We had failed to even make a decent grab at the pig.

At least the copious mud was proof of our valiant efforts.

My cousins Will, George, and Jacob got the pig into the barrel in about 4 minutes.

They were smart, and were unhampered by their short-skirted costumes.

I think they were the first team to even get that thing in the thing, and ended the competition with an honorable 4th place.

My high school teacher’s pants became so mudlogged that the crotch of the pants was down to his knees.

There he is, on the right, looking . . . very dirty. Many politically incorrect ‘dirty Spaniard’ jokes were made by my fun-loving but uncouth family members.

Seriously, take a good long look at those pants. It’s really quite amazing they didn’t just fall off him.

My cousin Eleanor was also hampered by her team’s choice of costume–black sweatpants.

Thankfully there is high-strength hose nearby to power-spray you and get the worst of the mud off.

My next Wild West Days was in 2003. This time, I chose to spectate and watch others pig wrestle.

Such as my mother (in the middle), who pig wrestled on a team with her two sisters. 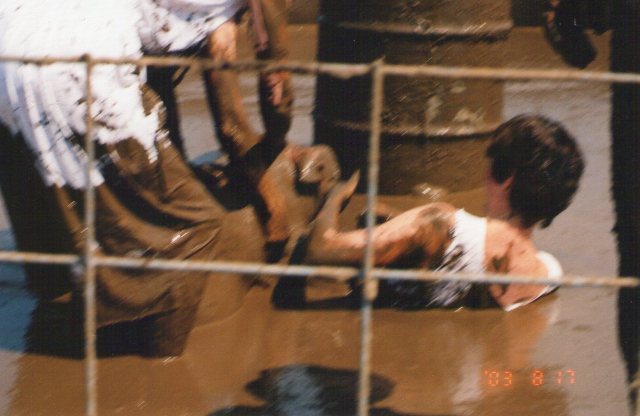 There’s my Mom, otherwise known as “Twink the Pink,” almost completely submerged in mud. I see the pig’s snout, but the whereabouts of its body are strangely confusing. It’s a big brown mess in there. 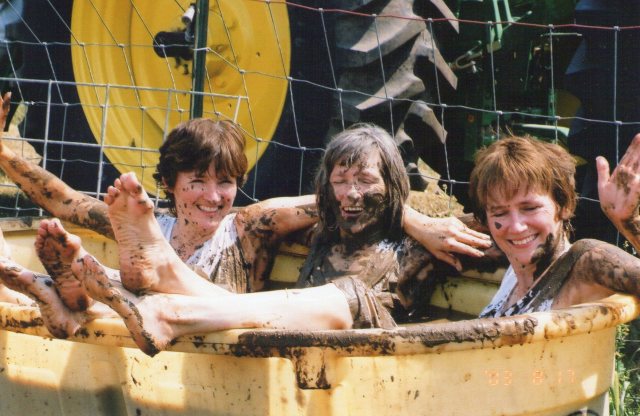 Thankfully they got squeaky clean in this tub as soon as they were done. My family places a high value on cleanliness.

It’s been 10 years and 3 months since I last pig wrestled, to be exact. And I have never been so grateful not to be plastered in  mud.

37 Responses to The ins and outs of pig wrestling . . . in Egyptian costume