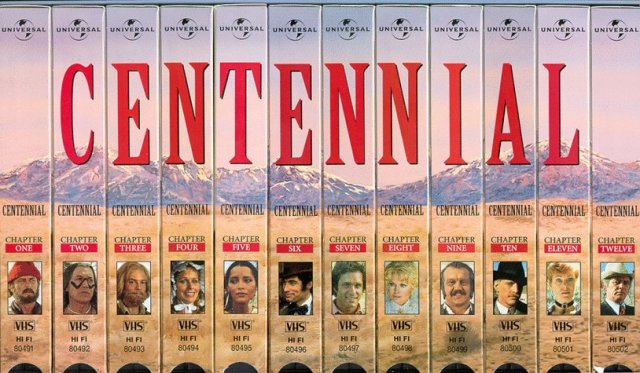 Centennial is two things: first, a novel written by James Michener which I haven’t read. Second, a TV miniseries from the 70s based on James Michener’s novel which I have now watched. It’s no small feat–6 discs with 2 extensive episodes on each. It’s about 26 hours long, total. Yes, this show consumed over 1 day of my life. Just look at that illustrious line-up of VHS tapes–that’s a whole shelf on your bookcase right there. My husband had watched this series as a little boy at his grandma’s house and wanted to revisit it, so we slapped ‘er in our Netflix queue, and we were hooked.

It’s my favorite kind of thing to watch: something that goes on and on . . . and on and on. I invest enough in characters, emotionally speaking, that I don’t want their stories to be over after 90 minutes. I want more! And more! And more! That explains my ertswhile addiction to the show “Alias”–it just kept going. So what if the plot was sometimes ridiculous–so what if people kept (presumably) dying and then showing up later in the show–so what if the writers were desperate for a twist in the plot and resorted to something approaching a zombocalypse–I had come to know and love the characters, and no amount of general silliness in the writing could keep me away.

My husband loves this show because it’s all about the history of this country as it plays out in the lives of specific characters. The miniseries covers the founding of a fictitious town on the plains of Colorado called “Centennial,” starting in the late 18th century and going all the way into the 1970s.  At first I was resistant to the whole show because the picture quality just looked like 70s film. There’s something about the colors, kind of washed out and brownish. But once I got over that, I realized the acting was superb, the characters intricate and well-developed, and the story sweeping.

Only a few negative things–since it was aired on TV, there are little “flashbacks” to previous episodes that can be a little lengthy and I think are just redundant. However, the little “fast forward” button on our remote fixed that with no problems. My only other hang-up is how quickly the 20th century flies by. The weight of the show is in the 19th century, and I think they cover the entire 20th century in the final two episodes (or was it 3?), in what felt like a mad rush to get to the end.

I do have to say that I actually left the room once when we were watching the episode with the Indian massacre (5th or 6th episode?), not because it was too graphic (it’s not), but because it was emotionally too difficult. The show does a great job of portraying the different prejudices that Americans engaged in over time, and the violence with which those prejudices frequently played out. And it’s not always pretty! I guess that’s history for you. Also, the show represents its characters as individuals as opposed to stand-ins for a whole people group, so there are good and bad settlers, good and bad Native Americans, good and bad cowboys, with plenty of grey areas in between. Oh, the grey areas. How true to life and confusing they are.

The show (consciously or not) really draws out the theme of American manhood, examining the spirit of entrepreneurship in both honest and dishonest characters, the seemingly necessary disregard ‘real men’ had for the law in the American West, and the desire many of these men had to leave their families and strike out on their own, fighting to subdue nature in order to forge not only a home for themselves, but also their own character and selfhood.

Let’s sum it up: it’s engaging. The acting is good. You learn a ton. So next time you’re bored out of your mind with romantic comedies (um, like that would ever happen), pick this baby up and pop ‘er in. 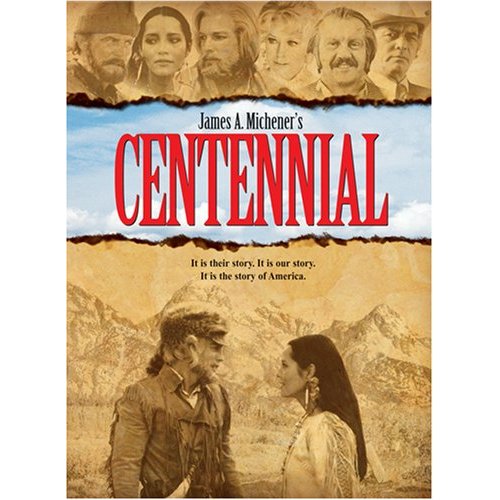