Dominion: why don’t I own this game yet?? 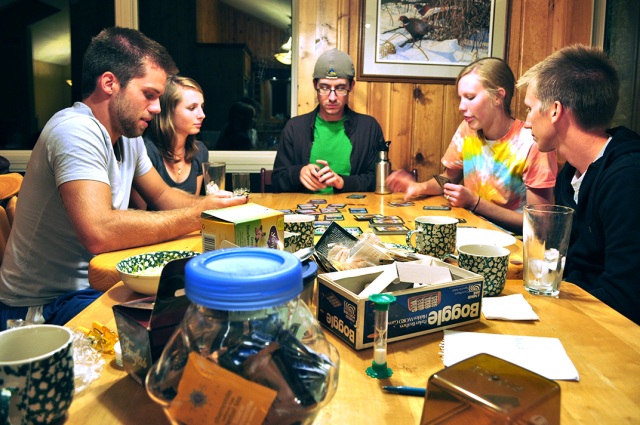 Dominion was the most popular game of Family Vacay 2010. I don’t think I would be exaggerating if I said that it was played around a dozen times per day. At least. 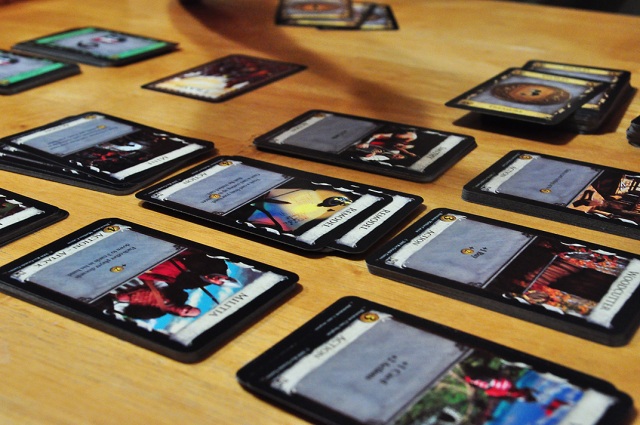 This game has won a ton of awards, all well-deserved. It also has a medieval theme, which makes for fun sentences like “I’m going to Throne Room my Woodcutter” or “You can’t Militia me–I have a Moat.”

Here are some shots of us playing; my sister Erica, Aunt Kathy, Uncle Brian, and my cousin Luke . . . 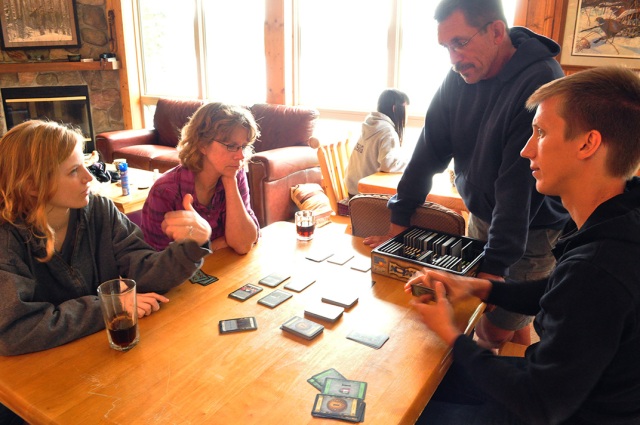 And here’s my husband added into the mix, with a triumphant little grin . . . he must have a “Moat” card. He loves those thangs. 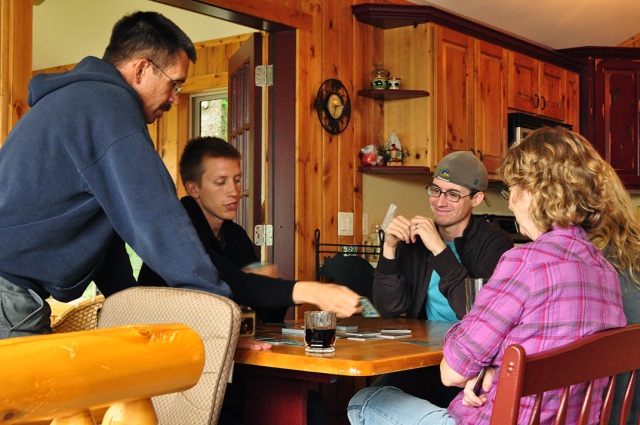 I do have to say that I love Erica’s face in the picture above. Is she confused? Spacing out? Focused? It’s such an ambivalent expression. 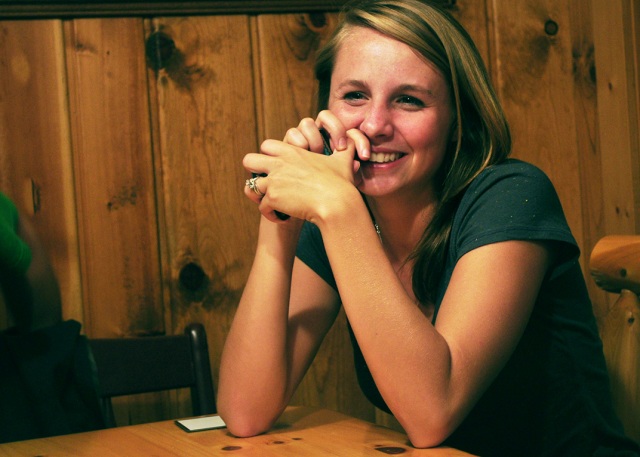 My cousin Brianna looking like she’s considering an awesome play . . .

. . . or maybe just which tea bag to choose? I recommend “Sweet Dreams.”

Why did no one tell me that pursing my lips like that gives me the old lady chin? I’m trying to decide who to hold accountable for this. There are so many options of where to place the blame.

I won’t walk you through the rules, because that would be boring. And I think I would just confuse everyone. Suffice it to say that the objective is simply to purchase point cards with money cards. Whoever gets the most points, wins. Simple enough, eh? You can download a PDF of the instructions from the game’s website if you’re interested. Or you can give my cousin Luke a call. He will explain everything–he’s quite good at it. Luke, you don’t mind if I splay your cell phone number all over the internet in case some hapless soul needs a good explanation of the difference between the ‘trash’ pile and the ‘discard’ pile, right? I didn’t think so. I mean, look at this face–it’s the face of someone who selflessly explains the same card game ten times. And then selfishly wins over and over again.

Selfish and selfless. Selfless and selfish. I think the phrase ‘paradoxical winning machine’ sums him up nicely.

My role in this whole shebang is to halt all attempts at a coherent explanation, and instead simply tell you 6 reasons why Dominion is awesome:

1. You can play with as few as 2 players (and as many as 4). Being a family of 2 at this point in our lives, my husband and I could have evenings of rampant Dominion-playing. And smoothie-drinking. And popcorn-eating. This batch of popcorn was particularly delicious. 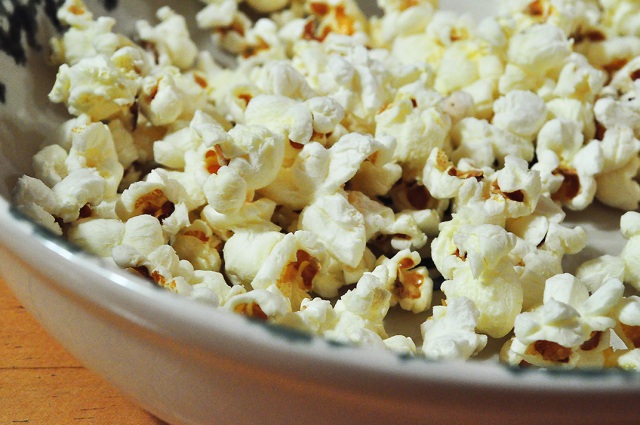 2. Luke doesn’t always win, like he does with Blokus. Though Luke may win most of the time, his brother and lifelong competitive opponent Steve had a long winning streak too. I, alas, never even started my winning streak. It was about to happen when Family Vacay ended, I swear.

Even Erica may have won some times . . . though does anyone remember that actually happening?

Just kidding. Here she is with Aunt Kathy–2 adorable blondies.

3. There’s a great mix of strategy and chance that keeps you on your toes. You can plan a lot and it will pay off, but you will also get turns which yield only 7 coins. You’ll understand once you play. When you get 7 coins, you will rip the hair off your head, face (if you’re a dude, or a hairy lady), and opponents’ heads/faces.

You will also rip your face off if someone uses this evil card to steal your money:

The Thief. I hate his guts.

4. The assortment of cards used in the game changes every time, which will in turn drastically change your strategy. No two games are identical. This built-in variety is what enabled my husband to play what probably ended up being at least 1,000,000 rounds of this game. 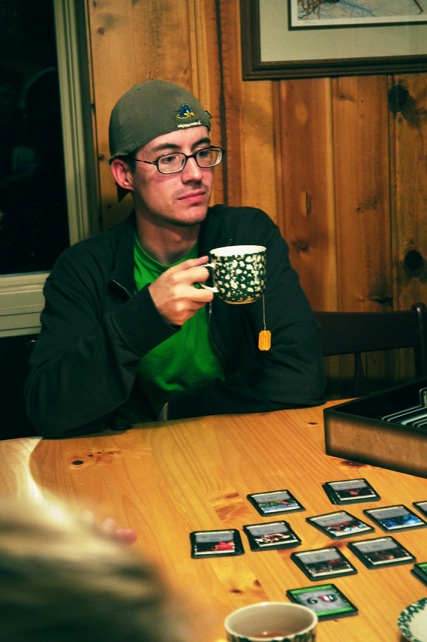 Here is Erica, looking devious over some evil change in strategy: 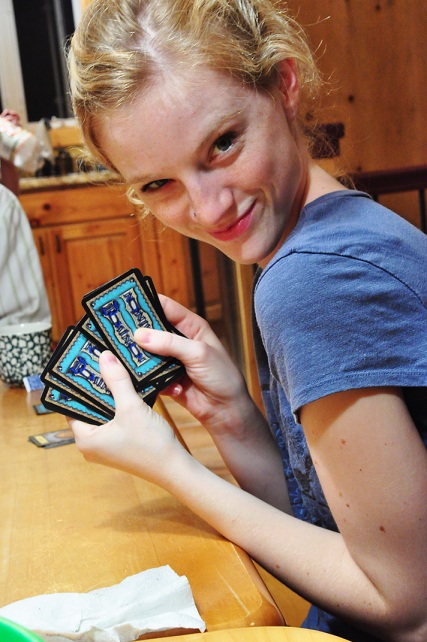 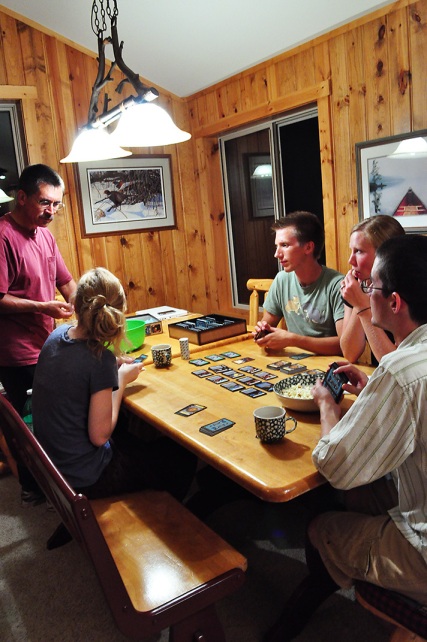 It’s especially fun when you and your sister pretend you are confused little aliens, though you won’t find that tip in the rule book.

Just kidding on that last one. But seriously, Festival is my hands-down favorite card of all time. 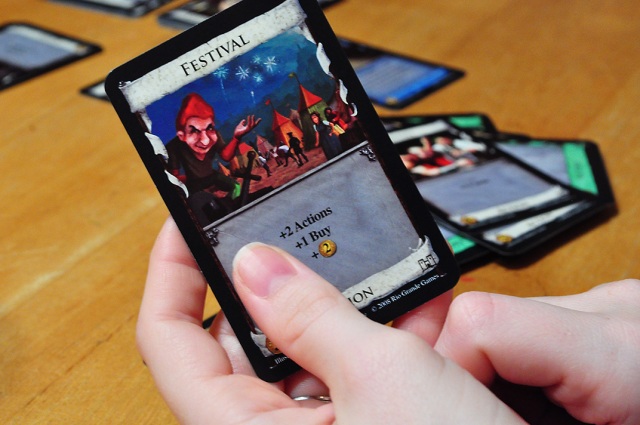 I mean, actions? Extra shopping? 2 more coins of purchasing power? The dwarf in the red cap asks you: what more could a girl want? And he’s got a point, goshdarn it.

It’s especially exciting when I get to Festival my Festival. Yes, I just used “Festival” as a verb. It’s an ‘action’ card, which completely justifies that weird bit of grammar.

The lingering question in everyone’s mind is–if I love it so much and am endorsing it to this extent, why do I not own this game yet? I offer 3 simple explanations: because Family Vacay just ended about a week ago and a half ago and I haven’t had time to hunt down the best deal. Because what with summer travels our August budget has gone completely bonkers and obliterated all semblance of sound financial practices in our home. Because I’m afraid that once we own the game my husband will want to play it 1,000,000 times with me per night. And I’m only up for one or two.

You can see the evidence of his obsession in how focused he is dealing the cards while I’m goofing off right next to him. Nothing could distract him, not even my most ridiculous ploys.

I tried to distract him man, but in the Dominion vs. Wife attention-getting playoffs, I crashed and burned. Is that another reason to purchase this game? Or perhaps a great reason not to purchase it? I can’t quite tell. My judgment must be clouded by the lack of snuggles I was enduring at the time.

I hope to have successfully explained why we don’t own this game yet, but for the rest of you, get with the program. Get Dominion. And then invite us over so that we can play too. 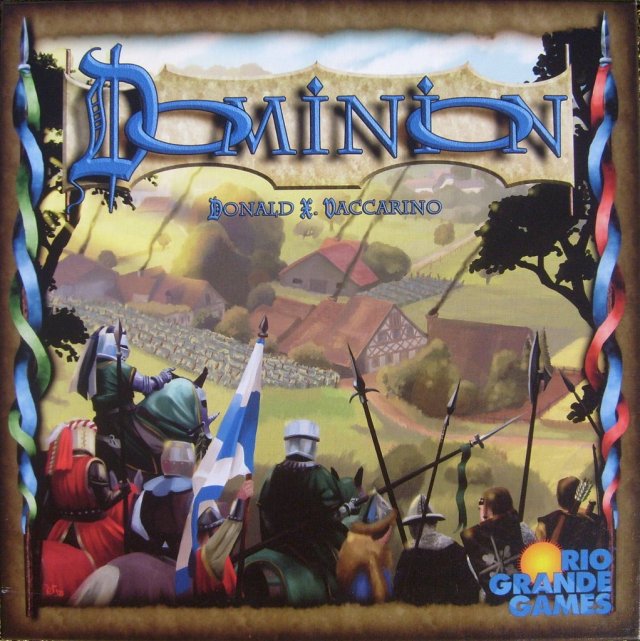 7 Responses to Dominion: why don’t I own this game yet??