Goodbye my friends. It’s been great. 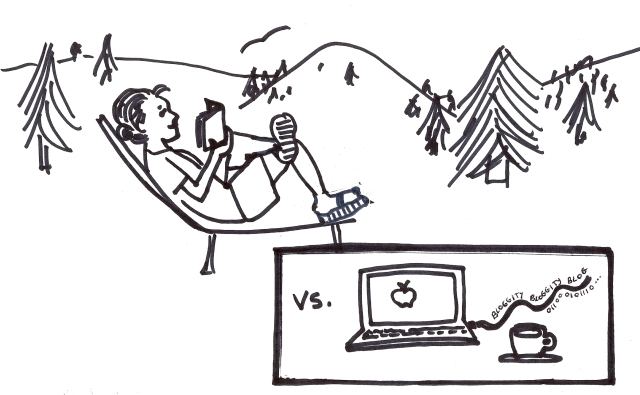 This post has two parts. Part 1 was drafted last week when I discovered I was about to be cut off from the internet. Part 2, I just now wrote. Please don’t be confused.

Well folks, as I mentioned in my previous post, we’re going to a house in the woods for Family Vacay 2010. And now for the breaking news . . . this house does not have internet. Therefore, the steady stream of posts I have been feeding to the blogmonster since I started this little shebang 10 weeks ago are about to be abruptly and completely cut off.

For the record, I did plan on taking a rest from writing new posts, but I had carefully prepared enough of them in advance to cover my bases while I was gone–book reviews on “Peace Like a River,” Diane Mott Davidson’s mysteries and the Flavia de Luce series. Recipes for Sage Mushroom Pasta and Penne Rosa. A post on the amazingness of Blokus. How to make a mosaic at home. Meditations on some of the psychological intricacies of a certain young freak at 7 years of age. I had a whole arsenal ready to go. The idea was that every morning I would simply boot up the Mac, hit “publish,” and then return to the world of nature, trees, etc.

However, it was not meant to be. And it’s all probably for the best. The arsenal of posts can be unleashed in the following weeks. Nobody is going to cry when it turns out I haven’t updated my blog, I realize this. And it’s dubious that the blogmonster is smart enough to identify my exact location and attack me in the night. I picture him as a large furry beast that has claws and about 100 jagged teeth, but is also kind of adorable. Like maybe after frightening you into tears, he’d give you a hug of comfort and contrition. Who knows, maybe he will track me down and I’ll take him kayaking or biking. And then I’ll help him brush his myriad of teeth–that would be a satisfying project.

In my spare time I sketched various possible incarnations of the blogmonster. In the above vision, he is Incarnation #3.

The thing about me you should know is that I’m an all or nothing type of person. I don’t always like it, but I am, and I definitely hold my Mom’s side of the family responsible for those evil little genes. They are project people, not maintenance people (um, extended family, forgive me for generalizing here a little to make my point). The kind of people who don’t get rid of a shirt here, a blouse there, or a dress that’s a little too small there–it accumulates and accumulates until one day the closet is simply exploding with clothes and it’s time for a massive overhaul, for which all of the relatives descend. This may or may not have happened a couple summers ago in our grandmother’s closet. I mean, closets plural. Rooms, more like it. And an attic. Pictures may or may not ever be forthcoming.

To use an example from my own inherited habits, let’s take scrapbooking–I neglect my scrapbook all year long, but when the fall comes I have a massive scrapbook updating week in which I order hundreds of pictures from walmart.com, buy new supplies, and dedicate myself wholly to the process of organizing the past year of photographs into 12×12 memory book pages. It can’t happen month to month–it has to happen all at once, in one big bang of pictures, sticky tape, scissors, etc. You don’t want to hang out in our livingroom when that’s going on.

Or we can take the guitar. When I stopped majoring in guitar, picking it up casually became increasingly difficult, if not impossible. It was just too painful to go from playing really well to being mediocre, so I simply stopped–it makes me quite sad when I really start thinking about it. And this is not by design–there’s some kind of genetic hoobedihabbiddy thingy going on.

Is this making any sense?

Do you still love me just the same?

What I’m trying to say is . . . it’s hard for me to do things halvsies. It’s all in, or all out.  And I am about to be forced to go from “all” on this blog project I have engaged in to what feels like “halvsies” by neglecting it for 1 week.

I’m sure this is going to be good for me. After all, I can’t keep blogging daily until I’m 85 years old, right? So it’s best that I rip off the chains of my obsessive nature and find a healthy balance in my blogging life. Healthy. Yes. That sounds . . . yes.

And here’s for the breaking, breaking news. Yesterday evening as I was talking to my blogging friend Carrie, she said “You know, Jenna, you can schedule posts to be published at a certain time”–meaning, it could all happen automatically while I was gone! Based on everything you’ve just learned about my inner workings, I should have rejoiced. Now I could command my little robot posts to do their work in my absence. Talk about magic. However, I did not rejoice. And that’s because in addition to being a project person, I am also an extreme planner. And I had finally reconciled myself to not blogging after a severe psychological battle. I won that battle, and I planned to stop posting, so now . . . I’m not going to post! What about all that talk about health I had drafted when I first learned of the lack of internet? Was I just going to delete that and move on? No! I was forced to go to “Plan B”, and now I’m not going to be bamboozled into going back to “Plan A” just because the internet is more magical than I ever thought it was!

And that’s where I stand.

Am I going to regret this forever? Am I proving myself to be inconstant, like women are said to be in that Italian song “La Donna E Mobile”?

Even the fact that I’m asking these questions tells me: it’s time to let go. For 5 business days.

Anyway, (sniff sniff), this isn’t goodbye forever (sniff sniff). I’ll be back, like it or not, for better or for worse, come hell or high water, be there or be square, something about the dogs coming home, and I’ll be bringing back stories, pictures and tidbits that I will blog about relentlessly.

Cheerio. I’ll kayak away my tears.

This entry was posted in Musings and tagged blogging, family, musings, travel, vacation. Bookmark the permalink.

6 Responses to Goodbye my friends. It’s been great.