Did you know I’m a novelist?

Yes, I wrote a book. In fact, I’ve currently authored 5 novels and a short book of poems. My first book is bound and everything. It’s called . . . well, now that I think about it, there’s not really a title page. My first grade teacher is the one who typed and bound it, so I blame her for this oversight. Let’s just take a look, shall we? I was 6 years old: 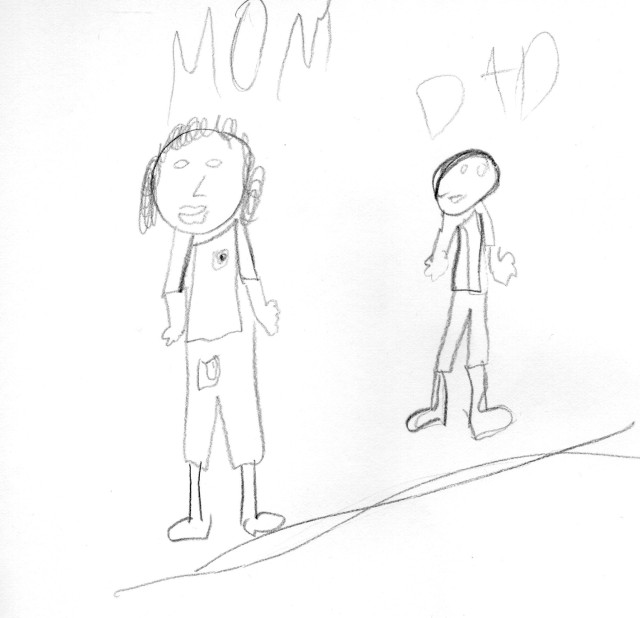 This piece of original artwork had the following wise words about parents below:

Some places are fun . . . and some places not . . . yes, I was nothing if not a very fair thinker. Like in the following observations on the subject of “Sisters”:

“My sisters always yell at me for no reason. They always blame me for bad things that they did. So then I get in trouble. It’s just terrible to have sisters like them. It’s just terrible! Just to have any sister is just terrible, simply terrible. They get into everything. But . . . sometimes nice!!!!!!!!”

Yes, I never indulged in exaggerated statements without presenting the balancing view at the end.

Let’s end on a fanciful note with my thoughts on “Dinosaurs”: 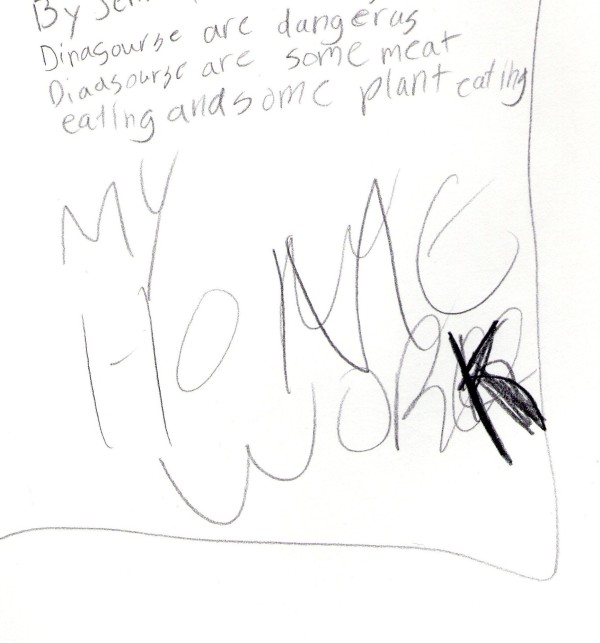 A treatise on our prehistoric reptilian friends

My second book came years later. It’s called “Cry Baby”, featuring a girl named Amanda who was always getting bullied and crying. You may not be able to find this on amazon.com, or at Borders. In fact, the only copy sits on my shelf—that makes it really valuable, right? A collector’s item, or something? 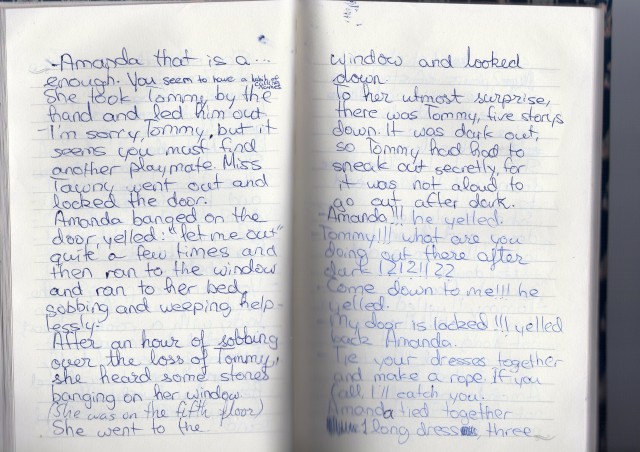 Amanda was tyrannized by her teachers as well as the school bullies, and the pent-up hurt roiling about in her inmost being causes the following outburst: “you violent humbug, piggy of the mud!!” Later on in a heart-aching twist she even turns on her best friend: “You dumb, ugly little tyrant!” But the most emotional tirade, also directed at a teacher, is: “You barfed upon lady with a rooster head! You hard-hearted, unloved, unthink-for-yourself, baby-brained computer-directed cry-baby!” Apparently my 9-year-old soul was rife with insults. Especially “computer-directed”–ouch. I would say that takes the novel from a “G” to a “PG” rating.

My thoughts as a budding young author were recorded in this inspirational journal entry dated February 8th, 1993. Original spelling retained.

“I am doing well in my story “Cry-Baby”, but mom said to many bad things happen to the main character, Amanda. She hurt my feelings by saying that excrushiatingly and . . . well anyway, I’m kind of glad she said that, so that that way I can change it, by making something good become of all the bad things. Wow!!

Dad said maybe I could get my story “Cry-Baby” published, and he wasn’t joking either. I suppose I could get it published . . . Actually, I think it’s very possible. Many kids my age have gotten books published. Maybe I could. And anyway, why not? Dad knows a writer (not personally), but he knows of a writer who they pay by the word. I’m not sure how much though. I wish I did , so I could have an idea how much, how rich he is. Not that I’ll ever be payed that much but. . . I wish they did pay me that much, but then again I don’t want to be famouse either. That surely would not be fun. Imagine people visiting you every second of the day, while you were so very hard trying to write? Ugh!!! The very idea of that is disgusting.”

I guess you could say based on this that Charles Dickens was my true inspiration. Or rather, his pay structure was.

My 3rd book, the short work of poems, is called “The Acrobat’s Fall”, inspired by Shel Silverstein. The only thing is, it was my Christmas present to Dad one year, and to this day it’s the only copy in circulation. Dad, I hope you’re taking measures to preserve and care for this national treasure.

My next 3 books (“Changes”,”Times to Remember”, and “Our God is an Awesome God”) centered around a girl named Rachel Byrd and her adventures starring in a play, riding horses, building a secret fort in a hay barn, and going to a million pool parties, where the boys expressed their avid interest in her. It pretty much sums up everything I wanted out of life at 11 years of age.

At the beginning of each book, I made a little bio for Rachel to get the readers on board with her interests. While leafing through it, this caught my attention:

Let’s jump right into the first paragraph of the very first book:

“”Dear Diary”, I began to write, “Today my sister broke my porcelain cat, I yelled at her and now I’m sitting in my room, grounded . . .” I bit the end of my pen, and a tear dropped onto the yellow page. Flinging my diary aside, I covered my face and sobbed. I finally blurted out “It’s so unfair!” I stifled back a few sobs and stuffed my fists into my eyes.”

Wow, that’s so intense I don’t think I can read anymore for today. I can only digest this in extremely small chunks–like with all quality writing, right?

I even started Book #4, which jumps right into the rehearsals for the play Rachel is starring in. Doesn’t every girl fantasize about having to kiss the boy of her dream in a play they star in together?

“I began to get nervouse . . . and Jesse, who was acting the part of my love, walked on to the stage. Trudy softly played her flute , and I looked at him dreamily. Then, we both knelt down and put our faces close as if we were kissing. Mrs. Lenbraum applauded softly, and I grew red hot. “Very well!” cried Mrs. Lenbraum.”

OK, yep, I can kind of see where that might not have quite been the writing quality that would zoom me to the top of the bestseller list. But where there’s not quality, make up for it with quantity! Or at least that must have been my motto, since there are hundreds of pages of this stuff–hundreds, my friend.

After pouring my heart into these 3 novels, I kind of fell off the wagon. As with all great writers, after your masterpiece you need time for your soul to regenerate. I think I require spa treatments for a full recovery to take place. In the meantime, are there any editors out there who want to do a second run of these books? I mean, a first run? I think I’ve discovered what my life has been missing all these years–royalties!

8 Responses to Did you know I’m a novelist?