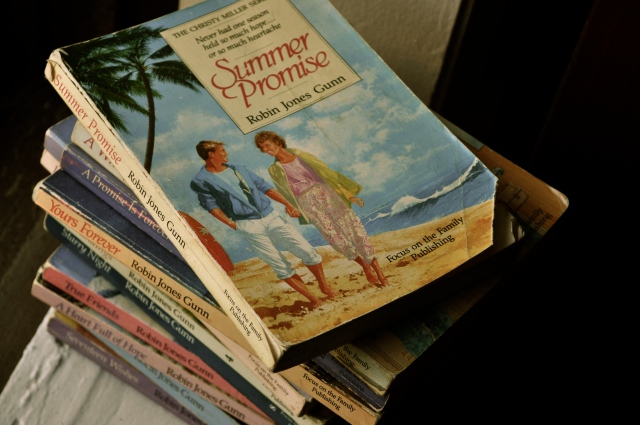 (Disclaimer: this is for the wimminfolk. The dudes can read some Terry Pratchett instead.)

Are you a preteen or teenage girl? Have you ever been a preteen or teenage girl? Are you a grown woman who maybe still gets a little weepy when certain commercials come on depicting older couples walking hand-in-hand down beaches at sunrise, or somebody blowing out some candles on a birthday cake? If you fit into any of these categories, then your life is not complete until you’ve read the Christy Miller series by Robin Jones Gunn. She is a Christian author who wrote this series of 12 books for teen girls, starting with “Summer Promise” and ending with “A Promise is Forever”. OK, I know you’re distracted by the “art” on the cover there–but you know what they say–don’t judge a book by the hairdo or clothing choices of the woman on the front. And Christy doesn’t actually wear white polyester pants with hot pink swirlies in the book. 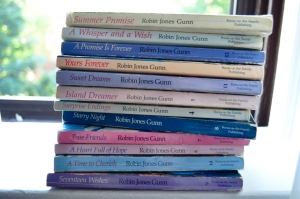 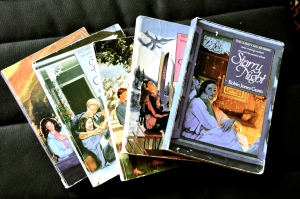 I read them when I was 11 for the first time, and have re-read the series at least a dozen times since then. In fact, I read them all again just last year. They are freshly written, they don’t deal with “topics” (sex, drugs, eating disorders) in a heavy-handed way (I never felt preached at as a young girl)… and you just love the characters! In fact, I refuse to call them “characters”. They are real people and that’s just that. My childhood friend Stacy and I argued passionately over whose imaginary volleyball team Christy and her boyfriend Todd were on–they were real to us. And I should add that Christy and Todd are on my imaginary volleyball team to this day, in case anyone’s asking.

There is an equally wonderful follow-up trilogy to the series called “Christy and Todd: the College Years”—but start at the beginning, my friends. This trilogy is the icing on the cake. And people don’t eat the icing first. At least they’re not supposed to. Ehem. (I mean, I just lick it to be thrifty, I swear! Waste not want not! Icing saved is icing earned!)

I still cry when I read these books. There’s an especially heart-wrenching moment in “Sweet Dreams” (book 11), when Christy and Todd are watching a sunset at the beach, and they’re, like,  holding hands, and, like, she can tell, like, (sniff) something is really bothering him, so she says (sniff)—but I’m not giving it away! (yes, it’s my strategy to draw you in with that well-crafted cliffhanger, why do you ask?)

Robin Jones Gunn just nails the thoughts that go through our heads as women—the insecurities, the hopes, and the confusion. In fact, sometimes I think “maybe I AM Christy Miller!” And then I quickly look around to see if there are any psych-ward clinicians waiting to drag me away. This identity disorder has been with me since 2004, when I emailed the following to my husband from my parent’s apartment in Spain:

“Well darling–I’m going to run downstairs to get my stock of hairclips back up, and then I might retreat a bit into my Christy Miller book. I picked up the first one thinking “this will be good for a laugh”, because I was so obsessed with them as a teenager, and I’ve discovered that though the lessons the author is trying to teach are rather obvious, I still love these books!! Sweetie, it’s time you know this–I was Christy Miller!! I lived in California and hung out on the beach and dated Todd Spencer, the surfer with the screaming silver blue eyes!
Just kidding. But reading Christy does feel like reading my own journal, in a weird but wonderful way. She was my escape world for so long, my alternate life. This is why we want to have daughters (note the coercive/persuasive use
of “we”): so that they can read the Christy Miller books!!!”

These books hold such a special place in my heart. Buy them for a teenage girl in your life. And read them yourself too. Unless you’re a dude. I’m sorry that the covers are so corny. Christy herself is apologizing inside for her spiky do and hairspray-coated bangs. But once you get past that, the inside will melt your heart. 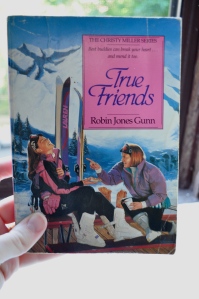 Postscript: My spiky-haired Christy edition is no longer out there … they have revamped Christy’s image and dragged her kicking and screaming into the 21st century. Hooray for modernization! 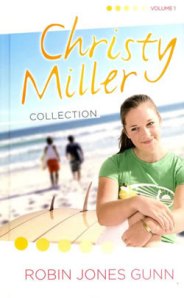 This entry was posted in Books, Movies, & Music and tagged books, memories, reviews. Bookmark the permalink.