Heidi is pregnant. My little sister! She and her husband were the cutest babies on record, so it stands to reason that their offspring will pretty much cause everyone in sight to pass out from cuteness overload. Observe the cuteness, and fear for my future as the aunt of this baby–please look closely at the upper righthand picture of baby Mike (have some smelling salts handy): 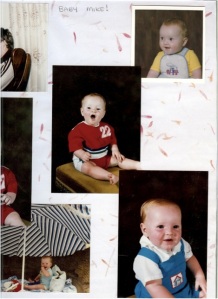 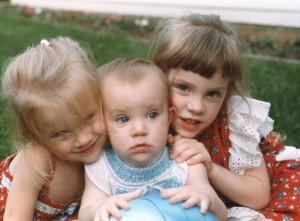 Heidi is in the middle ... Erica to the left, and me to the right

We all had names in the womb. I was always angry about mine:

Heidi=Biscuit (also the name of our 3rd cat)

It’s so convenient to name the little creatures. That way you’re not referring to “it” all the time, especially if you don’t know its gender or don’t want to know. Heidi and Mike have chosen wisely: they call it “the bun”. HOW ADORABLE IS THAT? Picture this:

“Good morning honey! How did you and the bun sleep?”

Or “Is the little bun taking a nap after that kickboxing tournament?”

Anyway, this has prompted discussions between my husband and me. What will we call our future baby-in-the-womb? The very first thing that popped into my brain was “the alien”. Or to be more cute “the little alien”. Because … isn’t that what it looks like? Anyone? Anyone? Yes, I know pregnancy is going to be beautiful and magical, in fact one day I want to experience it myself, but I can’t shake the idea of an extraterrestrial floating in some kind of organic space ship that’s in my belly. With weird feeding tubes all about. And I have to ask myself—do I want to be a space ship? With weird feeding tubes?

I’ll update you on all my conflicting emotions once I have one in the oven.

One day, when my future child is playing with Heidi’s child, just think of the discussions those two little cousins can have :

(Situation 1=alien is a boy)

Heidi’s little one: “Hey guess what, before I was born I was called ‘the bun’!”

My little one: “Oh yeah? Well I was ‘the alien’! Isn’t that awesome! My alien smashes your bun!”

(Situation 2=alien is a girl)

Heidi’s little one: “Hey guess what, before I was born I was called ‘the bun’! What were you called?”

My little one: [starts weeping uncontrollably] [beats chest] [tears out hair] “I was called . . . I was called the ALIEN!!! I think I’m going to go run away and join a band of anarchist pirate thieves [where a tragic love story and an untimely death will occur] because my parents don’t love me!! I’m a freak and I’m sorry for everything!”

Wow. I didn’t realize that my future little girl would be so scarred and that her pre-birth name would lead to her ultimate demise. I’d better come up with a cuter name. Pronto.

What did you name your pre-birth child? Was it “sweet pea” or “little dahlin”? For those of you who—like myself—have not yet reproduced, what do you plan on naming it? “Pea in the pod”? “Homunculus” or “hotcake”? Maybe I’ll name mine “pancake”—or even better “pamcake” as in “a wagon fulla pamcakes”.

On a side note, did you know that the baby in the womb has little fingernails at 4-5 weeks? These are the thoughts that make me swing between “ew, gross, my body becomes a sci-fi vessel for another being!” and “can I please have 5 babies immediately and name them Cutie, Patootie, Puddin’, Lovecakes, and Fred?”

11 Responses to The Bun